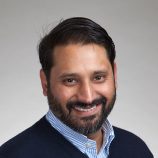 Mohamed is a digital media practitioner, entrepreneur and strategist. As the Head of Online at Al Jazeera English he led the team that produced the award winning coverage of the Arab revolutions in 2011. Previously, he started Al Jazeera’s New Media department, and served as an advisor to the Director-General. In 2005 Mohamed founded QatarLiving.com (acquired in 2012), a listings and community website that quickly grew to be the largest site in Qatar. He also co-founded Signalnoi.se, a social analytics platform for newsrooms that won the Knight News Challenge, and he’s been an active angel investor in a variety of digital start-ups.

Mohamed is a member of the Board of Directors of Global Voices Online and the Mozilla Foundation. He is also a member of the World Economic Forum’s Global Agenda Council on Social Media. He received his undergraduate degree in Computer Science at the University of the Witwatersrand and a master’s degree in International Relations from the University of Cambridge. Mohamed is based in Johannesburg.