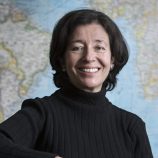 María Teresa Ronderos is a Colombian journalist, director and co-founder of the Latin American Center for Investigative Journalism (CLIP), which leads cross-border collaborative investigations that seek to hold power to account. She is a regular columnist for the daily El Espectador and teaches workshops for journalists with the Fundación Gabo, where she also sits on the Board. For almost five years she headed the Independent Journalism Program of the Open Society Foundations, which supports more than 130 media and freedom of expression organisations around the world. For 14 years she held different editorial positions at Semana, the leading Colombia news magazine. She has been a digital non-profit media entrepreneur, involved in the creation of LaNota.com, Votebien.com and, from 2008-2014, of VerdadAbierta.com, specialising in investigating war and peace in her native country.

María Teresa is the author of several books, the latest of which is the best-seller Guerras Recicladas (2014), about the history of paramilitarism. Her investigative journalism career has been recognised with the “journalist of the year” Simón Bolívar Colombian national award, the Maria Moors Cabot award and the King of Spain award. Currently she also serves on the Board of the Committee to Protect Journalists and on the JSK Journalism Fellowships Board of Visitors at Stanford University. María Teresa is also a member of the Board of Trustees of Media Defence, which provides legal help to journalists, citizen journalists and independent media across the world.