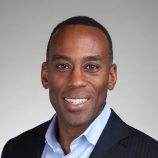 Kihara (Key) Kiarie, Chief Investment Officer, has extensive experience as a media investor, operator, and advisor, and brings to MDIF a wealth of first-hand expertise in equity and debt structuring, building companies, board service, exits, and media management across a range of broadcast, digital and telecom companies.

After studying economics at Dartmouth, he started his career as an investment banking analyst at J.P. Morgan. Following five years in the investment industry, Key earned his MBA at Harvard Business School. After Harvard, he joined Saban Capital Group, where he spent nearly a decade specializing in the media, entertainment, and communications industries. Highlights of his tenure as Managing Director at Saban Capital include major investments in Univision Communications (the largest Spanish-language diversified media company in the US), a commercial broadcaster in Israel, a pay-TV operator in Hong Kong, and a digital media venture in New York that was sold to YouTube.

In 2012, Key took on an operator role when he joined Revolt Media & TV as their CFO, overseeing finance, business development, strategy, technology, operations, and investor relations for the multi-platform network founded by Sean Combs. Most recently, he was an investor and advisor to a number of media and technology startups. Since 2015, Key has also served as an Independent Director of Somos, Inc., the administrator of toll-free numbers for North America, and Chair of its Investment Committee.