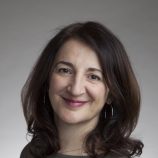 Elena is an attorney with extensive experience of commercial law in multiple legal systems. Since joining MDIF in 1997, Elena has played a critical role in structuring, documenting and enforcing cross-border debt and equity investments for independent media in numerous emerging and frontier markets. Prior to joining MDIF, Elena worked on property rights of refugees and managed a legal policy task force for the former Yugoslavia at the Open Society Institute in New York. Elena was a founder and general secretary of the Helsinki Committee for Human Rights in Serbia from 1994 to 1995 and general secretary of the Center for Anti-War Action until 1994. A graduate of the School of Law at the University of Belgrade, Elena worked in private commercial practice in Serbia before completing an LLM at New York University School of Law.