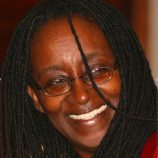 Catherine Gicheru is founder and director of the Africa Women Journalism Project (AWJP) and an International Center for Journalists (ICFJ) Knight Fellow. The AWJP drives coverage of underreported gender, health and development issues affecting marginalized groups and works to strengthen the voices of women journalists by helping them to become innovators in their newsrooms. Catherine leads a team of journalists, mentors and data analysts in five African countries (Ghana, Kenya, Nigeria, Tanzania and Uganda) who are producing smart, data-based storytelling with a special focus on COVID-19.

Catherine was the first woman bureau chief and first female news editor of the Nation Media Group and was the founding editor of The Star daily. She co-founded East Africa’s first budget and public finance fact-checking and verification initiative, PesaCheck. She is an advisory board member of the Reuters Institute for the Study of Journalism Oxford, the Aga Khan University’s Graduate School of Media and Communications and the British Council’s First News Worldwide program. She is also a member of the International Women’s Media Foundation (IWMF) Online Harassment advisory board. Catherine advised on the Open Society Foundations’ Fiscal Governance Program and the ICFJ’s State of Technology in Global Newsrooms survey. She is a jury member for the WAN-IFRA Africa Digital Media Awards and European Journalism Centre’s MoneyTrail, among others.