Across India, long unfinished construction projects for health care clinics and schools are being completed. Widows of deceased migrant workers are receiving compensation they’re due by law. Farmers are accessing information on government programs and practices that can increase their productivity. Fishermen are sharing weather information in real-time with other fishermen.

India’s poor are finding a voice—or more accurately, a media platform to share it. This is causing the authorities to pay attention, knowledge to be shared, and the public to engage in debate about social and environmental issues.

This is what happens when the bottom of the pyramid—those living on less than $2.50 each day—access a social network.

The company that created the platform is Gram Vaani. Gram Vaani builds technologies that empower the global poor. In just five years its flagship product, Mobile Vaani, has become the largest voice-based social media platform in the world. In India alone the platform has reached over 800,000 households with a goal of networking 50 million people. Gram Vaani’s larger suite of products, including a host of community engagement tools, has reached 2 million users in India, Afghanistan, Pakistan, Namibia, and South Africa.

Mobile Vaani works by allowing users to post and receive social media messages using their voice, on a basic mobile phone, allowing them to bypass internet. To 93.3% of India’s 833 million rural population without access to the internet and the 450 million who are illiterate, this is the difference between participating and not participating in the debates and decisions that shape their lives. Mobile Vaani estimates that roughly 65% of the poorly-literate/low-income population in India are unlikely to have access to the internet in the next decade, and that 40% of this market currently has access to mobile phones.

Gram Vaani’s simple, low-cost system has significantly lowered the barrier to entry to social networks for Indians living at the bottom of the pyramid. Take the widow above. Unsure of the whereabouts of her husband who had migrated to Delhi for work, and with no other way of finding out, she placed a call to the Mobile Vaani network and told her story. Via the platform, someone in Delhi was able to connect with her and inform her of the details of her husband’s death. The story was published on Mobile Vaani’s network and shared with the state’s Department of Labor Director, who prompted his government to pay the young widow the compensation she was due as a result of her husband’s death.

An Indian journalist describes the Mobile Vaani platform as having become the voice of rural Indians. “Villagers, long neglected by the government and media alike, have finally got a platform where they can discuss issues regarding health, unemployment and education without fear and be reasonably confident of receiving a reply from the concerned authorities.” 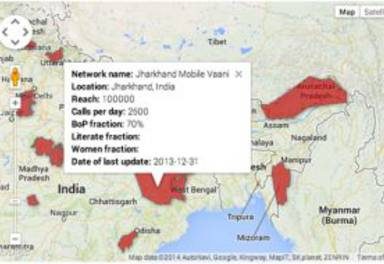 The enterprise and its founders have won wide accolades. The Economic Times named Gram Vaani among 14 startups to watch in 2014, Vodafone awarded the company an mBillionth award in 2012 and 2013, and Ashoka Changemakers’ named Gram Vaani a finalist in 2011. The idea for the firm was sparked in 2008 when its co-founder, Dr. Aaditeshwar Seth, won a Knight Foundation competition for devising software that first-time users of community radio could easily operate.

“The vision behind Gram Vaani is to build technologies that empower people at the bottom of the pyramid,” said Dr. Seth, who has a PhD in computer science, in a 2012 interview with mBillionth. “People who currently do not have a voice, whose stories don’t get told, profiled in mainstream media, they should actually be able to bring out their problems, their issues, their demands.”

Gram Vaani has found an important partner for its products—the development sector. Gram Vaani partners with non-government organizations, international development agencies, universities, and corporations seeking to speak to, moderate and share with, and seek feedback from the poorest populations in India.

It has worked with Oxfam to learn more about violence against women in India—the campaign reached 400,000 households and generated 400 messages from the community. It has worked with Merck and the White Ribbon Alliance for Safe Motherhood on a program that will allow women to use Gram Vaani’s voiced-based platform to review the quality of care they get from clinics. Other partners include Stanford University, Sesame Workshop, CEDPA, CINI, and Pradan.

Speaking to WCRC Leaders, Gram Vaani Program Innovations Manager shared how the firm uniquely reaches the most discounted. “In my career of seven years in the development sector, this is something entirely new in terms of ensuring last mile connectivity to the rural folks. I have visited some of the most remote regions in Jharkhand, places where there are no concrete roads for 30 kilometres, places where rivers and ponds dry up in the summer and places where villages after villages have been affected by mining and villagers have been evicted from their own lands. Apart from their struggle for survival, what these people need is a way to communicate their issues to the larger world and to the relevant stakeholders. This is where JMV plays a huge role.”

Digital News Ventures, MDIF’s fund for making seed investments in news and journalism start-ups, has invested in Gram Vaani since 2012.

If your organization is looking to engage with rural communities over voice, contact Gram Vaani at contact@gramvaani.org.