Mabel Cáceres was through with Peru’s President interfering with her reporting when she launched her news business.

“I was directing a local TV channel owned by a university in 1999. The university, its authorities and the channel succumbed to the regime of President Alberto Fujimori,” said Cáceres, founder and Editor-in-Chief of the magazine and online daily El Búho (The Owl). “The newscast was suspended for a year.”

Seeking to hold onto and extend his power, part of Fujimori’s apparatus was dedicated to manipulating the press. As Freedom House noted at the time, a broad government campaign – including death threats, abductions and libel suits – intimidated many in the media into self-censorship and exile.

But for Cáceres, the newscast’s suspension was the last straw. She decided that the only way to guarantee independence was to set up her own business.

Cáceres wasn’t alone in resenting the Fujimori government’s efforts to control information. Raising the capital necessary to start the publication therefore proved to be less of an obstacle than she feared. In just a few months she had raised initial funding from a network of like-minded people, or, as Cáceres notes, “what we now call crowdfunding.”

She adds: “A group of intellectuals, journalists, friends, we were searching for financing between professionals, local companies and friends – everybody that was disgusted by the takeover of information by the government and the lack of independent bodies, at that time.”

By the end of 2000, Fujimori had fled Peru for Japan amid allegations of corruption and human rights abuses, charges that later caught up with him: he is now serving a 25-year jail sentence in Peru for murder, abuse of power and drug trafficking.

Yet the president’s departure didn’t herald the end of intimidation, rather it changed its form, becoming more subtle, more insidious. In Peru, as in many emerging markets, governments and oligarchs are increasingly adopting less visible ways of intimidating non-aligned media. Soft censorship, where biased media subsidies and advertising are used as tools to influence content and, ultimately, threaten an outlet’s viability. Earlier this year, Fujimori was convicted of funneling more than US$40 million in public funds to tabloid newspapers that smeared his opponents during his 2000 re-election campaign.

Combatting soft censorship requires even more business rigor and innovation. A decade and a half after Fujimori, Cáceres notes that financial intimidation continues to be routine for independent media. “[The environment] is hostile towards independent journalism because people from the government or from big corporations often directly tell media owners to avoid addressing certain matters or to impose a certain point of view. The way the hostility is manifested is by removing their ads.”

MDIF financing helped El Búho transition from a weekly newspaper to a print and online magazine format, and to further develop a TV program its staff used to produce as part of their efforts to strengthen the company’s commercial position. 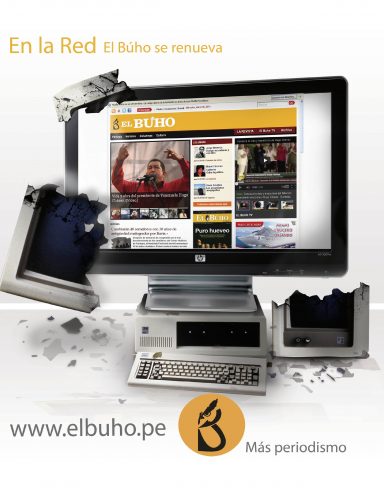 The magazine is based in Arequipa, Peru’s second city. Local issues are the main focus of itsinvestigations and consequently the major source of friction. “Corruption of regional presidents is a controversial topic because of all the power they have, and other cases in state universities, which were a kind of impenetrable territory which nobody knew anything about,” explained Cáceres. “Also the behaviour of extractive companies – mining – that do not pay taxes and do not meet environmental protocols, also for their economic power that ends up pushing their suppliers into removing ads from us.”

Another tactic to intimidate the magazine is to overwhelm them with court cases. Cáceres, who was named as one of 100 Information Heroesby Reporters Sans Frontières on World Press Freedom Day, 3 May, 2014, has been the target of more than a dozen lawsuits in the past two years and continues to receive frequent death threats.

Protecting the environment, particularly from the abusive exploitation of local resources, is a recurring theme of El Búho’s coverage. For example, over the last two years, the magazine has produced a series of articles about water resource management in Arequipa, a subject that is very sensitive due to a severe shortage caused by climate change and difficulties in treatment (most water isn’t potable). For years now, El Búho has also covered the community’s discontent with Peru’s Tía María copper mine, a US$ 1.4 billion project owned by Southern Copper Corp. The mine’s environmental conditions were the subject of a report by the UN’s Office for Project Services (UNOPS) in 2011.

“What keeps pushing me is to see the information gap that exists in the cities of Peru other than Lima. The media are more and more concentrated in large national conglomerates that ignore local reality.”

Cáceres says that in all parts of Peru, independent media have supported the country’s economic and social development by uncovering corruption at all levels of government. “It is helping to change society, which has been slowly creating greater public awareness about this problem and the need to control power.”

Although the desire to shine a light on wrongdoing is the shared motivation that drives Cáceres and her staff, it also contributes to the biggest day-to-day headache: economic sustainability. In a tough economic environment, moral support is essential. “We seek allies among civil society for mutual support and we are strengthening our commitment to the audience that supports us, at least in public opinion – they defend us on social networks, for example.”

Peru is a patriarchal society and discrimination is routine, yet Cáceres is clear that the pressure she lives under “is not so much about gender, but because of my independent position.” She advises women journalists, “to ignore the discrimination, because in the end what matters is how professional one is.”

She also advises aspiring female entrepreneurs in any sector to think carefully before they launch a business; they need to be sure they’re ready to face the testing times that inevitably lie ahead. “First weigh the risks and be willing to face challenges that are not present in other areas. For women, not to be intimidated, because in macho societies the easiest way to discourage them is to use aggression of their womanhood, to involve their families or defame them with matters of personal life. It is possible to face that, but you have to be prepared and you have to prepare your family for that. It happens in the same way to women that enter politics.”

In November 2015, Ms. Cáceres was awarded the IPYS award for regional journalism for exposing the authorities’ framing of a peasant for protesting against the sensitive Tía María copper mine.